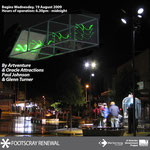 Laser projector onto multiple overhead screens and reflected to the ground

This ephemeral artwork was about commonalities and differences among the communities that call Footscray home.   Two animated laser programs ran at different times over 6 months
The first program focused on play, laughter, children and, by implication those emotions and experiences common to families of all nationalities through the use of interactive games
In the second program, the animated drawings of maps, words and footprints were used to highlight the cultural diversity of immigration to Footscray.
The projected imagery was not descriptive but rather an interpretation of the multicultural fabric of this area.  It was also about the qualities of line and movement – the art of drawing.